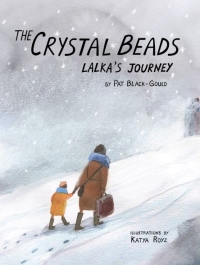 The Origin of The Crystal Beads, Lalka’s Journey


Why write a children’s picture book on the Holocaust? As a psychologist, adult fiction author, and playwright, I had never written a children’s book before and knew nothing about the process. Besides, there are numerous publications, movies, TV programs, and articles about the Holocaust, was more really needed?

But I had a story to tell.  A long time ago, a friend of mine, a rabbi, told me about a little girl in Poland during the Holocaust. The story haunted me. So I wrote it down initially as a monologue for an actress, believing at some point that I’d turn it into a play. Time passed yet I couldn’t get the little girl out of my mind.

Finally, a few years ago, I picked up the piece again and looked at it from a different perspective. I wasn’t ready to turn it into a play. Instead, I wrote a short story. Set in Poland in 1939, a little girl is asked to give up her Star of David necklace for a rosary, without understanding why. The mother must then make a heartbreaking sacrifice to keep her daughter safe. The Crystal Beads was published in Jewish Fiction .net in 2020.  It then won first place in both a statewide competition and then first place in a national short story competition conducted by the National League of American Pen Women.

After receiving those awards, I conducted readings and lively discussions of the story at conferences and meetings. Themes at these sessions included compassion, tolerance, courage, and sacrifice. The level of interest motivated me to continue with this project. But this time, I wanted to widen the audience. I wanted to reach children.

I began researching children’s books based on the Holocaust. In my search, I found a category on Amazon entitled “Children’s Holocaust Books.”  The total of 685 books mostly contain chapter books, but there were several outstanding picture books as well, which I’ve started collecting.

Given this amount of material, I still wondered if there was the need for another book and whether it was worth continuing my project. Around that time, I located a nationwide study on Holocaust knowledge conducted in 2020. The link to the study is attached below.  The respondents consisted of random young adults, ages 18 to 39. The research found a fundamental lack of knowledge about the Holocaust.  One out of ten respondents said they didn’t recall hearing the word “Holocaust” before. Just ninety percent believed the Holocaust occurred. Seven percent weren’t sure, and three percent denied it happened.  Almost half the respondents reported seeing Holocaust denial or distortion reported on social media.

Troubled by this information, I continued with my project. Fortunately, at that time, I connected with an incredible group of women I met through the Women in Publishing Summit. I then attended the Women in Publishing School, where I met other children’s book authors and writers in different genres and who, along with my publishing team, Purple Butterfly Press, are helping to bring The Crystal Beads, Lalka’s Journey to life.

This story is not just something that happened in the past and one does not have to be Jewish to be appalled by the horror of the Holocaust. In the study mentioned above, fifty-nine percent believed such atrocities could happen again. Perhaps if we keep alive the experiences of children like this little girl, we may reduce the likelihood of that belief becoming a reality.

UPDATE:  I wrote the above information before the Russian invasion of Ukraine. It saddens me that we are witnessing history repeating itself. This is all the more reason the messages of compassion, tolerance, and understanding need to be passed on to younger generations.